Cook your own Mexican specialities

Discover Mexican cuisine and make your own Mexican menu specialities with Palmer, a culinary artisan

A unique meal based on Mexican culture: guacamole, burrito and agua fresca

Wake up your taste buds during a workshop with Palmer!

This Californian-style Mexican cooking enthusiast will reveal the secrets of the most popular recipes. What's on the agenda? A Guacamole made according to the rules of the art, a refreshing Agua Fresca, but also how to roll a Burrito.

You will prepare the different ingredients and seasonings and learn the basics of cooking and flavour combinations. I promise you, you will not have time to get bored!

You will finish this workshop with a convivial tasting of your creations to travel to sunny Mexico and California for a few hours!

This workshop is offered in several languages simultaneously. The artisan will adapt the language of the workshop according to the participants present.

Palmer grew up in a multicultural family in San Francisco with an American mother and an Italian father. His high school years near the Mission District introduced him to Mexican cuisine, particularly the Mission Burrito, which was born in San Francisco and became one of his culinary passions at an early age.

In the 90s, he decided to move to Italy before settling in Brussels 10 years later.

He worked as a manager in a large multinational hotel group during all these years, but in 2015 he left it all behind to start his own business. He then launched his concept called CHEZWaWa, a new style of Californian-Mexican "farm-to-table" restaurant.

CHEZWaWa was among the first restaurants to receive the Good Food-Resto label, which aims to support and guide restaurants that are committed to sustainability.

On a daily basis, Palmer buys his proteins from Belgian producers and sources a maximum of local and organic products.

Friendly and gourmet, he is looking forward to welcoming you to his kitchens in the heart of Brussels to share his passion with you. 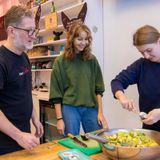 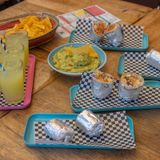 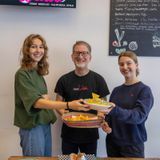 A unique meal based on Mexican culture: guacamole, burrito and agua fresca